Is standing up to a bully worth the effort? Writer-director Paul Jenkins explains why it costs so much money to take on a professional bully like AXANAR’s Alec Peters. 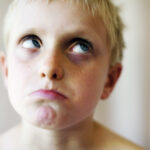 I shouldn’t have taken it on. I should have walked away. Yadda, yadda, yadda… you know the score.

But there was a bigger reason I should have walked away: the sheer cost to my family that loomed if I decided to stand up to the toxic, bullying behavior. Because the subject of our first documentary, The Battle for Axanar, is a known vexatious litigant.

That can get expensive in a hurry, and it is a loophole in our society that we must all agree to change. We are all targets. This issue is tearing us apart as surely as disagreements about politics, social issues, vaccination, and our spiritual beliefs.

Justice is simply about how much money you happen to have in your bank account.

Alec Peters, you see, passed the bar exam in North Carolina in the 1980’s, though he has never practiced law (more on this in future blogs). This essentially gives him a particular advantage against any of his victims because he pays pennies on the dollar, writing a substantial portion of his own lawsuits – in fact, one might say he is ideally placed to game the system. He frequently intimates or overtly states that he is a lawyer (he is not, but it is an effective way to threaten and scare people).

He has at times been involved in up to five suits concurrently, by his own gleeful admission. And as you can see from this blog’s video montage, he is not shy about his reasons for doing so: It’s all about money.

Peters’ first act against my company and I was an attempt to blackmail META Studios into signing a separation agreement by explaining how “bad it would look” to our potential investors if we didn’t play ball. These attempts were initially fielded by META’s CEO, Sarah Boyd, and Peters was duly rebuffed.

That was the point we should have walked away. It was a clear threat of a meritless lawsuit intended to scare, and to harm. But I simply could not do so, for it invited Peters’ attacks on the next person, and the next, and the next.

To no one’s surprise, he followed through with a different lawsuit designed to extract our copyrighted work. I realized it was high time that someone stood up to the bully who has made a cottage industry out of vexatious litigation. I knew it might be expensive. I had no idea just how bad it would be, and just how little protection the court systems and the bar associations offer us.

At the time of writing this, Peters has made threats to sue at least four or five others who have entered his sphere – all of whom are currently in the firing line if I am unsuccessful in standing up to him. He does not have a job, and no visible means of income save for his exploitation of his fan film. In his entire career he has yet to reach a courtroom because he successfully wears people down financially to effect settlements.

A pattern of behavior

And I am not the first person in receipt of this attempted blackmail – it is standard practice for the vexatious litigant, it seems. 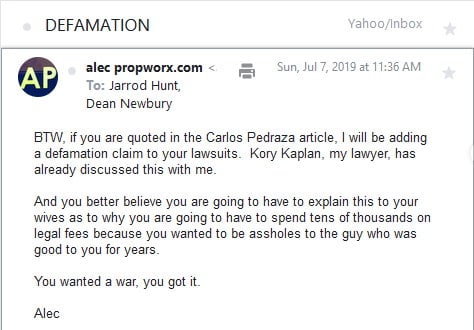 Disturbingly, it gets worse: In 2011, Alec Peters was sanctioned by the Superior Court of California, Orange County, for violations of SLAPP laws in a case he attempted to bring against a props blogger, Jason DeBord. He was ordered to pay court costs and attorneys’ fees. 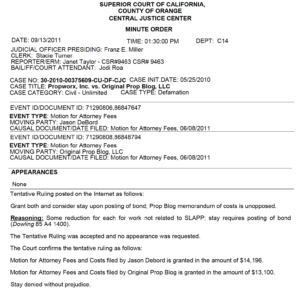 Though he has never actually paid the judgement against him, Peters learned from this. In a later suit against one of his former Axanar directors, Robert Meyer Burnett, Peters was alerted by his attorney that his case might once again run afoul of California protections.

In response, he filed against Rob Burnett in the state of Georgia, the incorrect jurisdiction, knowing this action would cost Rob a lot of money. The case was, of course, dismissed. But not before Rob Burnett had spent over $30,000 simply to have his case dismissed for being in the wrong jurisdiction.

It is the dictionary definition of “vexatious,” and it is what my family and I now face as we stare down the bully. So, let me explain just how much we have sacrificed in the name of facing down the toxic fan, the bully among us:

To date, as far as our research can determine, Mister Peters has yet to sit in an actual courtroom to face a judge and jury and account for his behavior. As you can see from his gleeful series of live streams, he delights in the pain he causes to others.

He states his methods and intent clearly: he uses lawsuits to fund new lawsuits. But this comes at a terrible cost to his victims.

One recent defendant – a father of five children – was forced to file personal and business bankruptcy because he had simply run out of the means to defend himself. The list of victims is long, and it should be noted that each of these people has family, friends and loved ones to support.

By taking this on, my family and I have now spent over $150,000 in legal fees – that is the nature of the sacrifice we assumed so that I might help protect future victims and put an end to this cruelty.

That is why I need your help.

This documentary is a means to an end. It is in all our interests that we collectively say no to those who are destroying the things we love. I assumed the risk, knowing that I would come back to all of you and ask for your help. I intend to document every single part of the process, and I intend to sit in a courtroom and face the bully, with cameras rolling.

By helping us fund this documentary, you are essentially taking a stand with me, and with my wife and two boys. Think of it as a form of “class action lawsuit” in the court of popular opinion (NOTE: just to be clear, it’s not an actual class-action lawsuit!).

This is our chance to get together and begin to say no to the cruelty, the greed and the damage being caused by the bad actors among us.

You are actively protecting future victims, and I firmly believe that coming together as a group has an even greater effect: it is time for us to heal as a society. It’s time to reject the bullying and the rule of narcissists.

Editor’s Note: In Part Two of “Vexatious,” Paul explores the exploitation of SLAPP laws by bad actors and also looks into the methods by which vexatious litigants threaten, harass and obfuscate their legal opponents. And we demonstrate the connection between bullies and fear, and how bullies turn their fear outward to make their victims afraid.

We need your help

The team making INTO THE WORMHOLE: The Battle for Axanar needs your help to bring the long string of vexatious behavior, abuse, bullying and intimidation to an end.

That end will, in all likelihood, come in a court of law – and that means lawyers and money.

We know the research we’ve done to this point helps us make a strong case, but we need your help to make sure that case gets heard. By making a pledge of support today, you can help us continue to build momentum toward completing our documentary project.